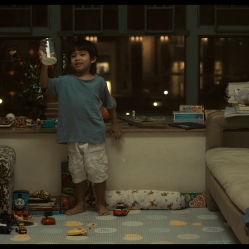 The Mother of One Recluse was the work of Chinese film director Yang Shu. She made the film five years ago, and in doing so offended the Chinese government. Since then, she has been forced to remain in exile in Hong Kong. Her mother, who lives in Sichuan, has had a relapse of her stomach cancer from years ago, and needs to undergo an operation imminently. She wishes to see her daughter and grandson, having only known the latter via internet chat. Therefore, Yang Shu takes the opportunity of a film festival event to go with her husband and son to Taiwan to meet her mother, whom they have arranged to meet when the latter is there on a mainland company leisure tour. To ensure this family reunion can take place under the strict control of regulated schedule by the Chinese tour company, the young family checks in to the same hotel, and follows the tour group to the various scenic spots they visit.

Nai An is a Chinese producer and actress, known for Suzhou River (2000), Old Stone (2016) and won the Best Actor prize at Locarno International Film Festival with When Night Falls (2012). She is also the producer of Lou Ye’s films.

Pete Teo is a multiple award winning singer-songwriter, composer, film producer and actor. He had a successful career in music before emerging as a sought after actor in Malaysian new wave cinema. He is known for Sanctuary (2004), Rain Dogs (2006) and Before we fall in love again (2006).

Ying Liang is also a film educator and festival curator. In 2008, he became the Program Director of Chongqing Independent Film & Video Festival. In 2009, he became the Principal Lecturer for Li Xianting Film School in Beijing and in the following year, the Director of Education for Li Xianting Film Fund. In the same year, he organized a ten-city screening tour of the best works from Chongqing Independent Film & Video Festival, in China as well as London and Cadiz. At the moment, he is one of the part time lecturers of Film/TV School of Hong Kong Academy for Performing Arts and Hong Kong Baptist University, programming for Chinese Documentary film festival (Hong Kong), one of the founders of Chinese Independent Documentary Lab (Hong Kong).